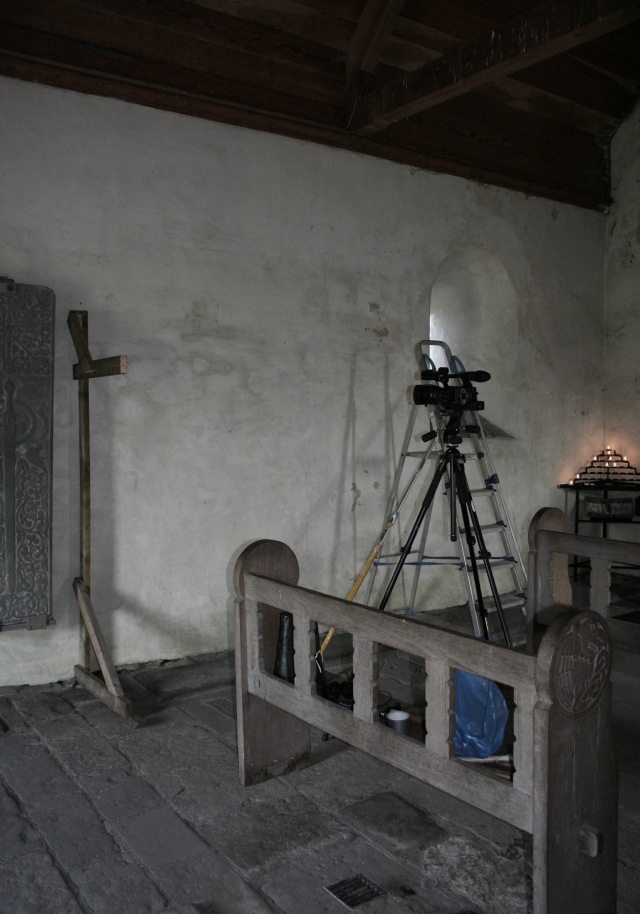 We’ve started work on a new project, Re-Soundings. Funded by Creative Scotland, we are carrying out a 12 week period of research and development of new work for exhibition at An Lanntair, Stornoway and in two site specific locations on Lewis and Iona in May 2016. The new works of sound, film and sculpture will explore the role of the bell as a symbol of secular and non-secular time within the landscapes of Lewis and Iona and within the wider context of the protestant reformation in Europe.

We’re currently working on Iona, researching the use of the bell in the early Celtic church. With the support of Historic Scotland, we’ve been filming in St. Oran’s chapel using their replica of Adomnán’s bell. We know from Adomnán’s Life of St. Columba that Columba had an iron bell at the monastery on Iona; Adomnán relates more than one incidence when, following a vision, Columba gathers the monks to pray together to offer protection to their brothers, seen by Columba to be in great distress.[1]

As part of this period of research on Iona, we’re holding an open event on Wednesday 1st July to discuss the project with islanders and visitors, prior to installing a piece of work in St. Oran’s chapel on Thursday 2nd July. This will coincide with the Iona Village Hall Music Festival which runs from Friday 3rd – Sunday 5th July.