Transformation; a reordering of materials, disturbing that which already is, a marked change in form, a metamorphosis.

Transforming WWI shells into sculptural sound pieces based on early Christian hand bells probably isn’t the most regularly occurring request that the Ratho Forge, near Edinburgh, receives for a job. Fortunately for the project, however, Pete Johnson and his team were willing to work with us as we followed our quest to reverse the act of destruction that we had read about several months earlier:

“The Heretics Take Down the Bells from the Churches in Geneva: On the next Wednesday (May 12th) those dogs removed the bell from Notre Dame de Grace and threw it down from the Steeple to destroy it. Afterwards they went to see the bells at the monastery of Palais and at the parish of Saint-Gervais because they wanted to melt them down and make weapons to use against monseigneur and the Christians.”[i]

Using the templates we had worked on at Maklab, Pete systematically followed a process of cutting, annealing, shaping and welding to create two new objects. The shells, some from the ordnance factory in Magdeburg where Luther gave one of his first addresses of the reformation, underwent a metamorphosis, leaving only the markings on the top of their new form to give any indication of their previous existence.

It was unsettling watching Pete cut into such historical objects of destruction, but with that there also came a feeling of excitement about disturbing both the form and the interpretation of the objects. It will be fascinating to hear the sounds that will be elicited from them by John Purser, when we join him in a Glasgow recording studio later this month.

Many thanks to Pete and his team for their skill and enthusiasm. 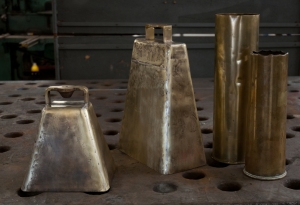