Comments on Re-Soundings from the exhibition visitor book. In the interests of objectivity, comments by friends and family have not been included. 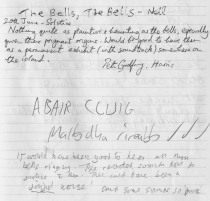 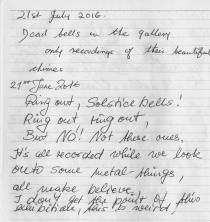 And these observations from writer and critic, Georgina Coburn:

“I enjoyed the Re-soundings installation at An Lanntair very much- transformation of the industrial material of war recrafted into a resoundingly interior, self-reflexive sculptural/ sound space worked extremely well. The capacity of human beings for mass destruction juxtaposed with our innate creativity as a species and expressed in objects crafted according to belief felt incredibly hopeful . In our secular age the idea of the empty space in the church belfry as a space for imaginative projection, reflection and contemplation of belief reflects the crossroad of our age in terms of how we collectively see, perpetuate or learn from the past. The installation and the questions it raises felt extremely apt given current world events.

Walking into the curtained, darkened gallery space had a cave-like feel, with the structure of the L-shaped gallery used really cleverly to create two intimate, contemplative avenues of space converging on the installation work at its centre. The circular projection on the floor of the Iona clock, the foundation of John’s musical composition and of devotional  life, appears as a kind of tonal memory- both visually and aurally. In terms of form and depth of tonality it evokes circular eternity, human archaeology, a cosmic lunar surface, an aerial map of a ritual landscape or even the radius of a blast zone with all of these ambiguities and contradictions imaginatively entwined.

Anchoring the work to the ground using the ethereal power of light is a quality that also extends to the 12 suspended bells of different sizes which respond to the variable air currents in the room. In the dim light, the heavy weight of metal appears suspended in complete weightlessness, almost taking on the figurative presence of angelic hosts. As you move around the installation, projected light creates a shape shifting patina, the bells cast elongated shadows upon a timeless clock face and pin pricks of light catch the square corners of the bells, piercing the mind like stars. There is something ancient and essentially primal about entering into that dark space, within and without, seeking illumination psychologically and spiritually.

The mindscape of these associative physical elements  are further animated by the sounds. Between the sound of silence and bells; tolling, jubilant, echoing as if cast down a well of time, sounding in percussive protest or calling the viewer into the circle, there is exploration of the human nature of belief in all its varied tonality. The form, sound and presence of the work is expansive, rather than presenting the possibility of self -reflection within the narrow frame of any singular doctrine. The photographic/ filmic element of the work is painted with light, anchored to the gravitas of cast metal; built for resilient endurance, akin to the human spirit. It’s a sonic work which crosses cultures, accommodating whatever projections the viewer may cast into the creative space.

Simultaneously there are opportunities for  consideration of culturally specific meanings and associations in the Shawbost conch. The trench Art at the entrance of the exhibition connects the maker to memories of home and family through domestic, decorative objects, hell  bent and crafted on human survival. The ancient unconscious belief is in the power of making/ creativity to transform; through thought, perception and human action. It’s an innate tendency that the contemporary world needs to remember and ultimately re-connect with if we’re going to survive into another century. The collaboration with partners and the public in the project appears seamless and it is impossible to separate the component parts from the whole. Congratulations to you and Hugh for pulling that off – a fantastic achievement for such a multidimensional project!

Unfortunately I didn’t have time to visit the Ness site as I was on route to South Harris and I won’t make it down to St Oran’s, but I imagine that the architecture of these will have had their own particular resonances with the work and process.”