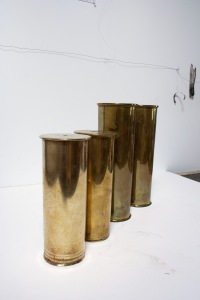 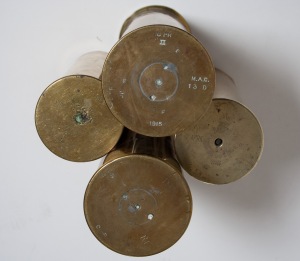 Last week four WWI brass shell casings arrived at the studio on Iona. The casings will be the raw material for a bell like structure based on the form of the early Christian hand bells.

One of the shells has the mark, “Magdeburg”. Magdeburg, in Germany, was one of the most important medieval cities in Europe. It was also home to a large munitions factory, which supplied the German military in WWI and WWII. If it’s possible to have an even darker human history than munitions manufacture, Magdeburg has it. The Polte munitions plant in Magdeburg, was a sub camp of Buchenwald and hundreds of Jewish women laboured there under dangerous, inhumane conditions. The shells we have date to 1915 -17 and two of them show evidence of metal working around the rim. It’s possible that they are examples of Trench Art, Trench Art is associated with WWI and describes objects made by servicemen to pass the time when not on the front line. On Saturday we met with musicologist John Purser. John immediately elicited sound from each casing, transforming them, but not diminishing the inherent heaviness of their history.