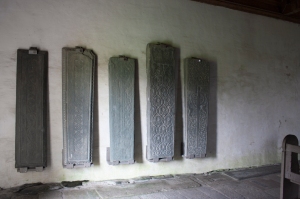 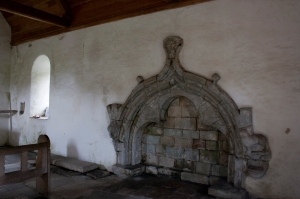 Images show medieval carvings displayed on the north wall of the chapel and a tomb recess on the south wall. The installation was projected onto the east facing altar wall.

There is some time now to reflect on the work on Iona before the research takes us to Lewis later in the month.

During the three days of the installation in St. Oran’s Chapel over six hundred people viewed the work and just under a hundred people have visited the Re Soundings blog from as far afield as Canada and Sri Lanka.

For some people coming into the Chapel it was an unexpected part of their visit, while others came with an intention to see the work. We had a strong sense of responsibility in changing the experience that people were having of the oldest surviving stone structure on the island; although St. Oran’s Chapel is dated to the 12th Century, the surrounding graveyard, Reilig Odhràin dates back to at least the 8th century.

By bringing the sound and presence of the early Christian bell back into the environs of this place we hoped to evoke a sense of the bell’s ability to create a space within time, as well as marking a period of time, to hold our audience’s attention and to let people experience its auditory power.

We expected to have some negative responses to intervening in this sacred space, we didn’t get any; either people were too polite or perhaps the work was sensitive enough to its context not to provoke this kind of response. We have permission to share this piece of writing, which was created in situ in response to the work. 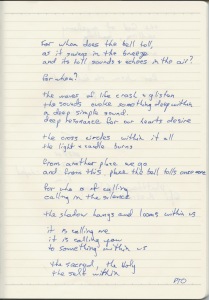 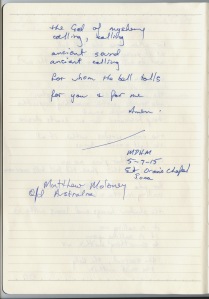 Poem by Matthew Moloney, Matthew is a priest and was visiting Iona on sabbatical from Queensland, Australia.

Measuring public response to this project is an important aspect for us, and we were fortunate to have the behaviors of visitors observed by Krittika Bhattcharjee, a PhD student at Edinburgh University, who is researching the relationships visitors form with Iona through the places they visit and the experiences they talk about as being most significant. Krittika will be sharing her observations with us and we hope to post about this soon.